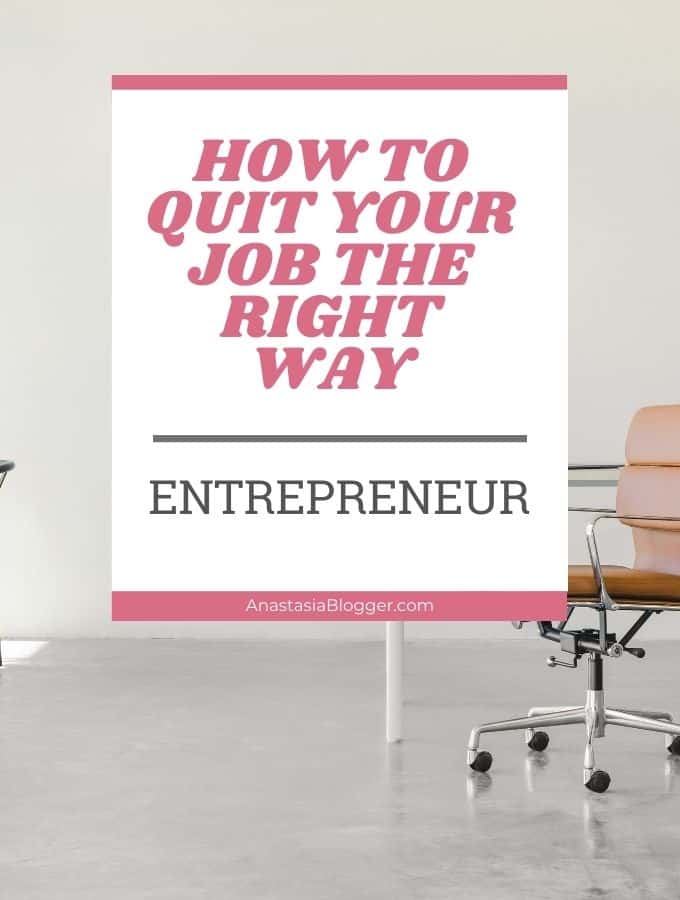 I’ve been in and out of corporate jobs and when I finally quit it for good in 2017 to start my online business, that last time I did it without making a ton of mistakes.

The previous attempts to quit my 9-5 were not very successful. I mean, I did quit a couple of times but then I had to start over looking for new jobs and because I wasn’t properly prepared for the big move.


Now I will tell you what I REGRET about the way I quit my day job.

Hey, I don’t have anything against corporate careers and many people succeed in it. But maybe you are a little bit like me. Maybe you’ve always had this voice in your head telling you that you are not cut for the 9-5 job and there is something else out there more exciting and rewarding waiting for you.

I had different experiences at different companies. I can’t say my corporate jobs were always entirely depressing or worthless for me. After all, if I didn’t have those jobs I wouldn’t end up creating my online business because I’ve got the ideas and a lot of experience in online marketing which I am using in my business every day. And the main thing I learned at my corporate jobs was that I can do almost anything if I put enough effort into learning it.

But a few things have stuck with me and eventually lead me to a decision that the corporate world is not for me.

At my first corporate job, my boss the editor-in-chief of an online magazine, and she had gone on maternity leave.

I was initially very honored because she chose me out of the entire team and told our higher-level boss that I was the best candidate to work in her place.

Initially, I was asked to work for the same salary but do the job of 2 people. I agreed because it was supposed to be a temporary “trial” situation. But 6 months passed and nothing changed. I was working extra hours at the office and then kept working at home in the evenings to keep up with all the work I had to do for the 2 of us. I was exhausted but hopeful because I thought by the end of the 6 months something would have to change.

No one was asking me to talk about the future, so I initiated a meeting with the boss and he said that he was happy with my work at the two positions. So it was all going well until I asked if there is any change in my salary or in my official position expected.

Then he told me I was too young for editor-in-chief position (although I was 6 months in doing that work for free!) I was 23 years old but it wasn’t the real reason. He just didn’t want to admit that I was entitled to a raise and that was it.

So I told him alright, thank you for your time. And I quit.

But what stuck with me on that meeting was that when signing my papers he saw that before this job which was my first full-time job after the University, while I was studying, I had a part-time job as a waitress.

So, he looked at my papers and made a pretty humiliating remark something along the lines of from a waitress to an editor-in-chief, yeah?

I was actually very proud of that waitress job because I never had to ask my mom for money since I left home at the age of 18, I always worked part-time while studying.

Basically, at my first office job, I faced the glass ceiling and biased attitude. It was the first red flag for me and since then, I started thinking of my way out of the corporate world.

I don’t want to talk in this post about all the signs that bring you to the decision to quit your job and start your own thing. Each one of us had some kind of experience that worked as the red flags and lead us to a decision about quitting the 9-5.

I can just tell you that I personally always felt that I wanted more control over what exactly I do at my job, I always wanted to set my financial and expertise-wise goals way higher than any job I ever had could offer.

I wanted my own thing and starting an online business was just the most logical and affordable for me. Logical because I always worked for companies that operated mainly online, so I had a pretty good understanding of what I was going to do.

And affordable because you can start an online business with a little investment of about $3/mo which is the cost of hosting your website. If you want to know what I’m talking about, you can watch this video right here:

So what are the things you should and should NOT do between the moment you make a decision to quit your job and actually quitting?

1. Don’t tell about your decision to ANYone of your colleagues too early

It might be even your best friend who will share the news with their best friend and so on, maximum in a week your boss will know all about your idea of quitting and who knows what will be the reaction and how you might lose the position of strength when you actually need to talk to your boss.

2. Save enough money to live for at least 6 months without an income stream

You don’t know how fast things will get going for you in your own business. Always hope for the best but be prepared for the worst-case scenario. You never know. Imagine that you quit your job and your business idea was in the tourism niche. Now look back at the beginning of the pandemic and how it affected tourism. You need to have the time and the space in your head to start fresh and focus on your own business without having to worry about your basic bills and needs.

This is something I actually did before quitting my job the last and final time. I started a blog and was working on it for about 11 months while still at my day job. So I did have to sacrifice some of my Netflix time and about 6 hours on weekends for almost a year, to work on my blog as a side hustle and without seeing significant financial returns initially.

But that’s why I told you, start it WHILE you are still at your 9-5 job and build up the skills that you need to be ready to quit. Find your first few clients if you are going to be a freelancer or start any kind of service-based business so that when you quit your job, you have a smooth transition and already have some history in your business.

Even if you already talked to your boss, writing an official resignation letter is probably even more important because it’s your legal document that defines the last day of your work. In many countries, workers are obliged by law to give an official notice to the company 2 weeks or even a month in advance. If you are new to the corporate world, it might be a surprise to you if you just talk to the boss but don’t sign an official resignation letter, the company may decide to keep you longer than you expected.

5. Learn what you need to actually start your own business

Before quitting your job if the plan is to start your own business, make sure you read this post where I gave you the essential steps to starting your online business this year. You want to read it to make sure you have at least an idea of what will be your first steps when you leave your job, so that you can start your own business the right way and fast.

With all that said, I would love to hear your side of the story! In the comments, let me know what is the most frustrating part of being in the corporate world for you. Now I hope you will take the leap when it’s the right time for you and don’t make any costly mistakes in the process of quitting your job and starting your own business. 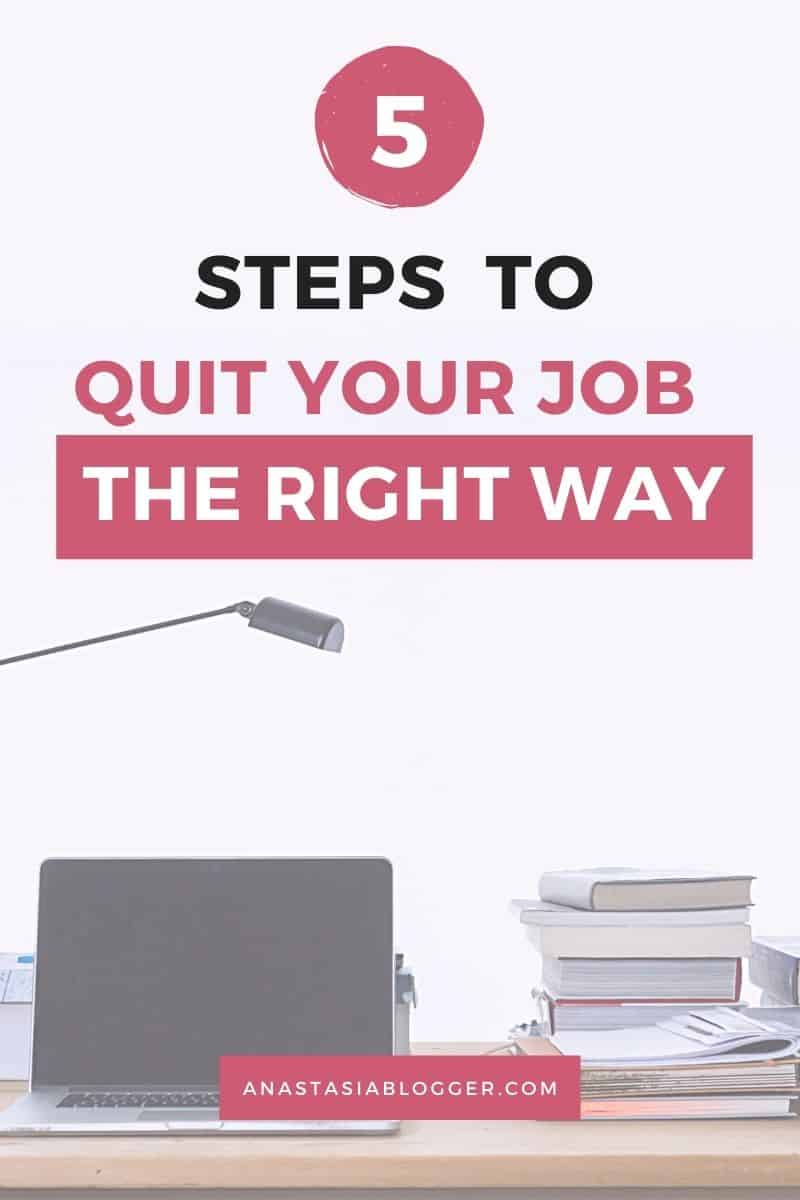